The series of photos taken by Guido Guido of some of Le Corbusier’s projects constitute a reading of the ‘oeuvre’ of the master conceived within an editorial project developed with publisher Einaudi as part of the series ‘I millenni’. This series focuses on major literary works and is directed by Mauro Bersani. This volume was published in 2003 with the title: Le Corbusier, Scritti, by Rosa Tamborrino, Photos by Guido Guidi.
The photos by Guido Guidi are an integral part of the editorial project from the very beginning and contribute to the volume with a reflection on a selection of works. In the context of creation, no illustrative addition would have been coherent, nor  any architectural image would have been conceivable. Guido Guidi is the artist who, with a camera, dialogues with the architect – ‘homme de lettre’, as Le Corbusier loved to present himself: both aware of the deep interpretative value of the act of observation.
In a volume dedicated to a writer who created his books with collage of texts and images, the work of Guido Guidi draws a portrait of the architect through fragments. Partial visions, nothing other than details that nonetheless, are details that turn out to be enlightening.
The subjects chosen by Guidi from a long list of buildings cross the themes proposed in the introductory essay in a completely autonomous way. The marginal investigations on the main oeuvre – in the archives as well as in the photos – led to research on lesser-known works. The shots of Guidi reveal some of them nearly for the first time, such as the Duval factory.
The work that Guidi created for this project is far more expansive than what has been included in the volume. With this exhibit, an extensive selection of the reading of Le Corbusier by Guido Guidi is presented for the first time. Compared to the admittedly generous selection in the volume by Einaudi, this exhibit shows – not just quantitatively but also in its facets –  a wider project and more interpretations.
The Usine Duval, the factory for the Manufacture Duval in Saint–Dié des Vosges in the aftermath of World War II (started in 1946), was an extraordinary construction site for Guido Guidi as it was for Le Corbusier too.
Guidi’s perseverance in framing the details of a place, the materials combined during the construction, the colors of the spaces, together with the notes glued on the walls or on the textile containers, deeply deals with a work that Le Corbusier had conceived for a different factory, a ‘usine verte’, as he wrote in the La Ville radieuse.
Photographic fragments define the articulation of the large volumes, of the pure geometries outlined by color contrasts, by the game of solids and voids, by the ‘pan de verre’, the first glass wall by Le Corbusier at the Cité de Refuge (completed in 1933). The dictated framing is an invitation to think of signs and spaces – of which the tridimensional perception is emphasized – seizing the sudden moments they appear through ‘slow’ shots that actually indicate minimal movements of the shooting point.
The series of houses confronts an architectonic theme radically questioned by Le Corbusier in favor of an innovation of the idea of living.
The work of Guido Guidi, rather than lingering on the symbols of a vocabulary, inspects with apparent simplicity the signs that reveal traces of a thought. What emerges are the clues of Le Corbusier’s constant research. 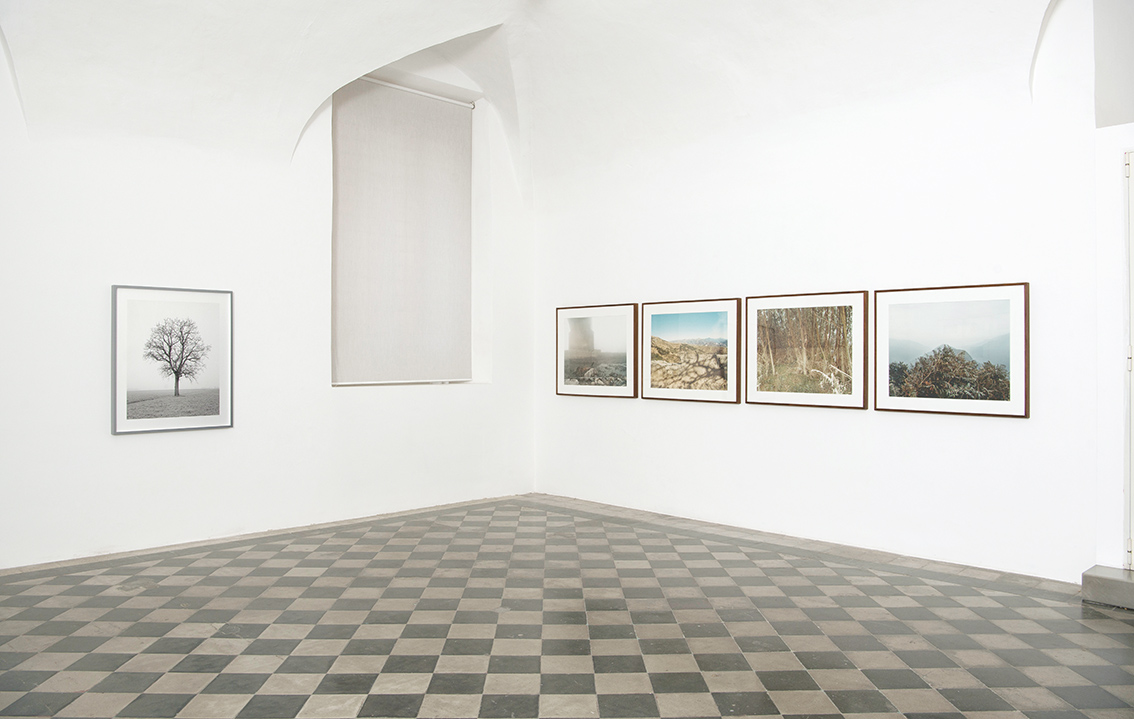