Both artists, from different positions and with different poetics, have worked for a number of years on the theme of landscape with a particular focus on perception.

Simon Callery (London, UK, 1960) makes emphatically physical paintings. The artist works in landscape, both urban and rural, to develop new forms and functions for contemporary painting. These works are characterised by material properties – including holes and voids – that expand their range beyond the pictorial. The paintings exhibited at 1/9unosunove are the result of a period of research over the winter when Callery was Abbey Fellow in Painting at the British School at Rome. Lenghts of canvas, soaked in pigment, were worked on by the artist in direct contact with the surfaces of the city (including archaeological ruins, suburban parks and the Tiber river), where the fabric was marked, cut and punctured. Back in the studio, the parts were sewn together to construct paintings with spatial depth. These contact paintings, as Callery calls them, derive from and record the urban Roman landscape and its individual character, not through conventional representation, but in direct physical terms.

Valentina D’Amaro (Massa, Italy, 1966) condenses, instead, the essence of the natural landscape in figurative images with a suspended atmosphere. Photography is the starting point, but used from the beginning with the “painter gaze”. Indeed, the painted image transcends the realistic representation through a formal elaboration that transforms the natural landscape into a metaphor referring to something else. At 1/9unosunove D’Amaro presents a selection of works from her latest Viridis series, started in 2016 as a direct evolution of the previous cycle entitled Vespro. The dominant color is the green of uncontaminated nature, but what we have in front of our eyes is not exclusively landscape painting. By configuring scenarios in which human figures don’t appear to give life to a narrative dimension, her paintings produce a state of alienating suspension, in response to which the spectator is invited to assume a contemplative attitude and to undertake, through their own perceptions and resonances, a journey of inner rediscovery. 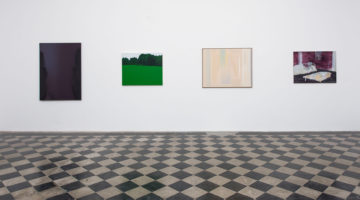